A mixed-use project in the Mercado District will receive $2.4 million in support from the Rio Nuevo Multipurpose Facilities District, the group’s governing board decided on Tuesday, Aug. 28.

The Rio Nuevo Board voted unanimously to contribute the funds to The Gadsden Company to assist in launching a west side project to include 122 courtyard housing units, nearly 13,000-square-feet of retail space and an underground garage. The apartments will include studio, one- and two-bedroom units. Gadsden Company President & CEO Adam Weinstein told the board that during the U.S. Department of Housing and Urban Development approval process for the $35 million Monier Building, construction costs increased 12.3 percent, adding to the total cost.

Weinstein said that the financing is in place, including $9 million of private money, and with the Rio Nuevo investment the project could break ground as early as October. 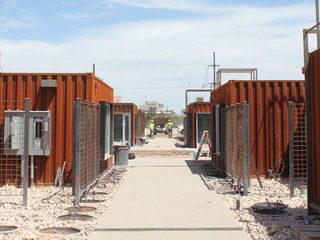